Joshua Cann is a painter. Cann’s compositions attempt to explain a ‘stream of consciousness’ through a zig-zag motif through the different primary colours. The Japanese describe this condition as ‘monkey mind’. The opposite of this state is known as ‘Zen’ which can be discovered elsewhere in the paintings. Colours and patterns dominate some of Cann’s canvases as well as photographs and photocopies. Collage is one of Cann’s main tools to entertain the eye.

Other more recent works include text and text alone; making bold alliterations, much different from the other colourful paintings. These works highlight Cann as a bit of a megalomaniac. The simple black lines are a welcome release from the intricate detailed earlier works. Cann’s display could be likened to the Bauhaus, or Dada movements. His favourite artists include Van Gogh and Francis Bacon and Andy Warhol.

Cann studied at the Chelsea School of Art and Design before studying in Newcastle for a few years. After leaving the School of Art there he transferred to Philosophical Studies. He now lives and works in London. 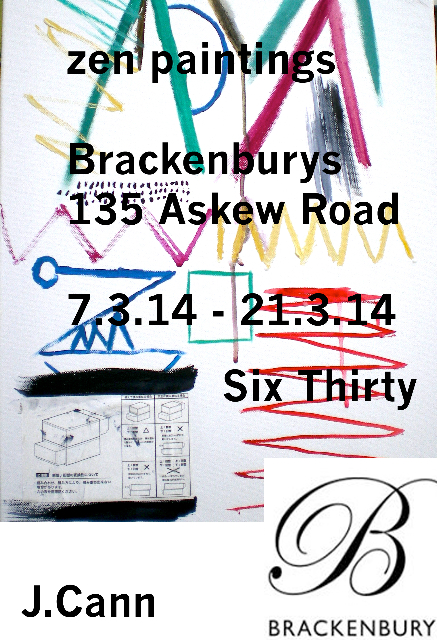 7th and runs to the 20th of April. His work is a splash of colour and has a slight look of pop art about it. Not that I am an expert. There will be a glass of wine and a meet the artist from 5.30 to 8pm on Friday 7th March